‘Tiny Tim and the Ghost of Ebenezer Scrooge’ is a great little Christmas read for those who are fans of the original tale ‘A Christmas Carol’ by Charles Dickens.

If you’ve ever wondered what happened to Tiny Tim, then this novella provides a a possible scenario, whilst trying to stick to the original novel as much as possible.

This time, it’s the ghost of Scrooge himself who returns to show the son of his former clerk how to make his way in the world as he mourns a lost love.

Whilst Norman Whaler does not fully capture the ethereal quality exuded by Dickens, this is, nevertheless, an endearing story which captures the spirit of Christmas just like the original.

London, its streets and its people, provided an enormous inspiration for the writings of Charles Dickens. The ‘Magic Lantern’ city route has been designed to bring together many of the places that inspired his works.

The full tour is estimated to take approximately 90 minutes at an average walking pace, but if, like me, you get drawn in to other aspects of your surroundings, it may take longer! In fact, I left the tour incomplete, but it’s a good enough reason to go back and finish it off on another occasion!

The tour begins at The Charles Dickens museum at 48 Doughtry Street, which was Dickens’ home from April 1837 to December 1839.  Charles moved here with his wife Catherine and their baby son Charley and two more daughters were born during their time here. It was at this house that Dickens completed Pickwick Papers, Oliver Twist and Nicholas Nckleby amongst others. 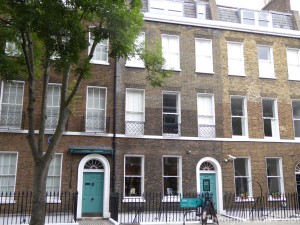 Mount Pleasant is used by Dickens for irony, as the home of the Smallweed family in Bleak House. Now the site of Mount Pleasant Post Office, established in 1900, in Dickens’ time you would have seen the Middlesex House of Correction (or Coldbath Fields Prison) which was on the site from 1794 until it closed in 1877. 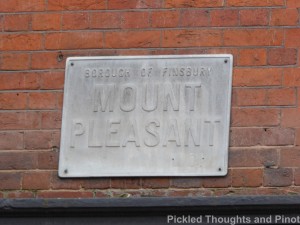 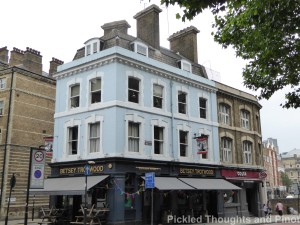 Pear Tree Court is thought to be the site Dickens had in mind for Oliver Twist where Oliver sees the Artful Dodger and Charley Bates pick Mr Brownlow’s pocket. 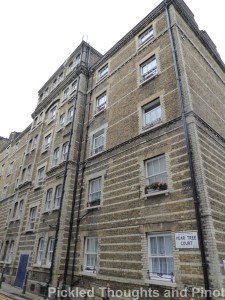 Clerkenwell Green was originally a green space in a semi-rural village, although not much remains of the ‘green’ today. The cattle trough is a reminder that this area was en route to Smithfield Market and cattle would be driven through the streets to sale and slaughter there. The Clerkenwell Sessions house features in Oliver Twist as the destination of Mr Bumble the Beadle’s visit to the city. 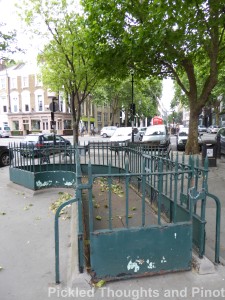 More well-known today for expensive jewellery, Dickens knew the Hatton Garden area as one of poverty and crime. It is at number 54 that Dickens sets the police office and magistrate’s court run by Mr Fang in Oliver Twist, where Oliver is brought after being apprehended for allegedly picking Mr Brownlow’s pocket. 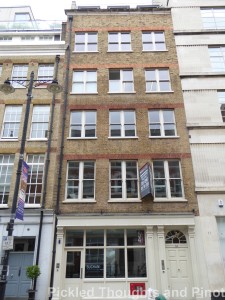 Saffron Hill is believed to the setting for The Artful Dodger leading Oliver Twist into Fagin‘s den. At the lower end of Saffron Hill is the One Tun, which is mentioned in the same novel under the name The Three Cripples public house.

The One Tun Public House 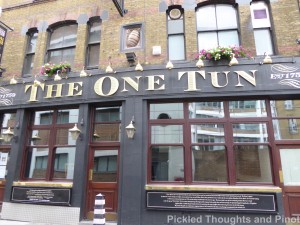 The One Tun Public House

Smithfield Meat Market opened in 1868, replacing the previous open air cattle market which stood in the same spot from the 12th century until 1855. Dickens describes conditions in the old market in both Oliver Twist and Great Expectations.

Snow Hill Police Station, stands on the site of the Saracen’s Head Inn. Dickens used this coaching inn as the place where, in Nicholas Nickleby, the schoolmaster Wackford Squeers stays on his periodic visits to London to collect pupils for Dotheboys Hall in Yorkshire. 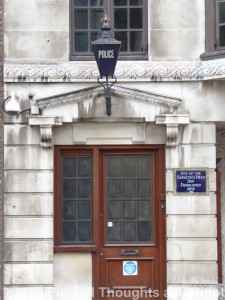 St Sepulchre’s Church bell rang at 8 o’clock in the morning to signal that executions were to take place, a fact observed by Dickens in Oliver Twist. 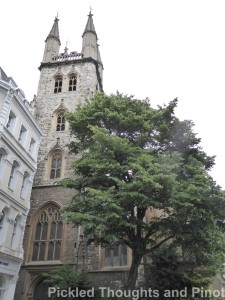 Newgate Prison stood on the corner of Old Bailey and Newgate Street. Between 1783 and 1868, public executions took place outside in Newgate Street. Dickens sets several memorable trial scenes here: Fagin in Oliver Twist, Magwitch in Great Expectations and Charles Darnay in A Tale of Two Cities. The building erected in 1902 on the Newgate site used some of the stones from the demolished prison as building material at street level. 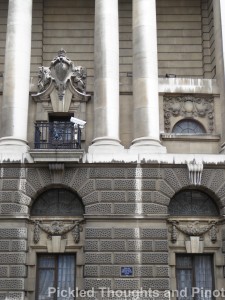 Site of Newgate, demolished in 1777

Full details of the complete walk, along with a downloadable pdf map of the route with additional information can be found on the City of London website here: Magic Lantern Tour