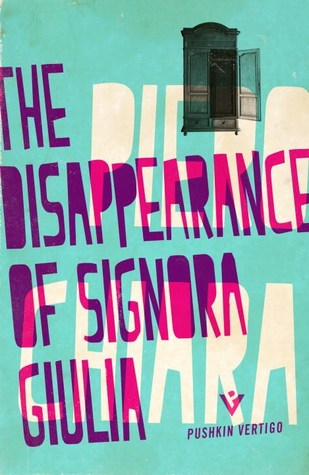 The Disappearance of Signora Giulia, originally published by Italian author Piero Chiara under the title ‘I Giovedi della Signora Giulia’ in 1970 is the first of his works to be translated into English.

As is to be expected from the title, the novel surrounds the mysterious disappearance of the wife of lawyer Esengrini, who enlists the help of detective Sciancalepre in discovering her fate.

What unravels seems at first to be straighforward. Giulia, who each Thursday, travelled to visit her daughter at university whilst also frequently meeting a man with whom she was having an affair, appears to simply have decided to leave her husband in favour of her new love. However, as the plot develops, we discover that Giulia does in fact, seem to have vanished without trace.

Over a period of three years, the mystery deepens and when a strange figure appears within the grounds of the family home during the night, it becomes apparent that Giulia’s disappearance is actually more sinister than it first appeared.

This is a novella and the narrative is simple, yet fast-paced, which holds the reader’s interest. The twist in the plot towards the end is compelling but ultimately frustrating as, without revealing any spoilers, it ends with more questions than answers!

Set against the dramatic backdrop of the Cotswolds, in an Area of Outstanding Natural Beauty, Sudeley Castle & Gardens is a history lover’s delight.

It has played an important role in the turbulent and changing times of England’s past, with royal connections that stretch back over 1000 years. Today it is a much loved family home and popular visitor attraction.

Inside, the castle contains many fascinating treasures from ancient Roman times to the present day. Outside, the castle is surrounded by award-winning gardens and a breathtaking 1,200 acre estate.

In the original 15th century west wing of the castle, visitors can begin their tour of this historic building which provides a detailed history of Sudeley Castle and its owners.

Just outside the castle entrance are the stunning remains of a building which housed the apartments of Richard III and the Banqueting Hall, complete with Gothic windows.

The Newell staircase was the traditional entrance to the medieval apartments. Built in the 15th century, the stairway was kept narrow and spiral in order to be able to defend against invaders.

One of the undoubted highlights of the castle tour is the ’20 Treasures of Sudeley’ exhibition, where items of historical interest are displayed at various points. Number 20, as displayed in the photograph below, is of the Roman Stone God, Apollo Cunomaglos, a Cotswold Roman deity (150-300AD). This was listed as lost for over a century but was recently discovered in a cupboard in Sudeley Castle!

One of the ’20 Treasures of Sudeley’

Another prized treasure held within Sudeley’s walls is the love letter written by Katherine Parr to Thomas Seymour after the death of Henry VIII, accepting his proposal of marriage, along with a couple of her books, including a prayer book.

The east wing of the castle, newly opened to the public, is a fascinating blend of old and new. Many of the rooms are in use today by the current residents but still retain a distinct sense of history. Modern photos blend with historical artefacts, most significantly the library, where the magnificent portrait of Charles I sits proudly over the fireplace.

While the castle itself is a treasure trove of historical legacy, the surrounding gardens are of equal appeal. Between the west and east wings, you find yourself transported back in time as you enter the Knot Garden, based on the design of a dress worn  by Elizabeth I in the painting ‘The Tudor Succession’.

Living sculpture of Elizabeth I

Just a few steps further and you find yourself in Queen Elizabeth I’s presence chamber, where she would have received her emissaries, courtiers and loyal subjects during her visits to Sudeley. Within the chamber is a living sculpture, created by David Freedman and Katie Green. The intention is that as the sculpture develops, various rambling flowers will be trained to illustrate the robes of Elizabeth I.

The tomb of Katherine Parr

The tomb of Katherine Parr

Sudeley Castle & Gardens is also the only private castle in England to have a queen buried within its grounds – Katherine Parr, the last of Henry VIII’s  six wives.  Visitors can explore the beautiful 15th Century church where she lies entombed. The tomb was rediscovered in 1782 when a group of ladies persuaded a tenant farmer to dig under the wall of an alabaster panel in the ruined chapel. The farmer uncovered a lead coffin bearing the inscription ‘Here lyeth Quene Kateryn, Wife to King Henry VIII’. When the lid was prised open, Katherine’s corpse was entirely preserved by the layers of linen cloth in which it had been wrapped. Over the next 35 years, however, the coffin was reopened on several occasions and the body began to decay. Eventually, Katherine’s remains were sealed in the Chandos family vault before being placed in the church when it was restored in the 19th century.

Also within the church is the Beckett window, depicting the murder of Thomas Beckett. Ralph de Sudeley was the owner of Sudely Castle at this time and it is believed that his younger brother William was one of the knight’s responsible for Beckett’s death.

There are nine magnificent gardens which sweep around the castle and grounds, each with a unique style and design. The Secret Garden evokes memories of the classic children’s novel by Francis Hodgson Burnett, while the Tudor Physic garden is a fascinating tour through the herbal remedies used to treat various ailments in Tudor times.

Although the Pheasantry is currently undergoing renovation, there are still a number of stunning birds on display.

The grounds and gardens are as compelling as the castle itself and the area around the Tithe Barn with its lake and fish is beautiful in the Autumn sunshine.

There is also plenty to keep young children occupied, with the new addition of the ‘Lost in the Willows’ maze, based on the Kenneth Grahame novel ‘The Wind in the Willows’, near the entrance as well as the adventure playground, complete with replica wooden castle.

‘Lost in the Willows’ maze for children

This is described as a standalone book although there are two previous novels in the series and reading these in advance may help the reader get to grips more quickly with the characters as it can be difficult to gauge who is who at the start.

Many of the characters share the same name and this too adds to the confusion at the start of the book. Conversations between characters were not always clear and it became something of a chore to read the first third of the story as a result.

As a fan of Tudor history, this book piqued my interest and the author has clearly done her research to ensure an historically accurate portrayal of those times. The threat posed by Henry VIII to anyone who fell foul of his ideas to reform Tudor Britain and the treachery among those charged with serving him are perfectly captured, although it is not until the second half of the book that anything really happens in terms of the plot.

Luckily, this part of the book picks up in both pace and action and it actually took me only a couple of days to read in contrast to the several weeks spent painstakingly trawling through the earlier section.

This had the potential to be an enthralling historical novel but sadly falls short.